It’s frustrating to have an injury, isn’t it?

But it’s a humbling experience. We may have plans for our bodies, but our bodies often have different plans.

I was doing well, gaining strength and mobility in my Ashtanga practice. I had been working on jump backs and jump throughs, trying to build strength in my arms to lift my off the mat so my legs could shoot back. I also had been working on stage 1 of handstand that I learned in my Bheemashakti training.

That is from a tiny, tiny mole removal, lol! The doctor needed to go long in order to seam it up, since she had to take out a circle of skin and you can’t really stitch up a circle.

Doctor’s orders were no exercise for a week, no lifting over 10 pounds, and certainly no yoga.

After a couple of days I practiced asanas that didn’t require weight on my arms or arm extensions. But even in trikonasana I could feel the skin of my arm stretch, so I didn’t want to do much of that.

Later in the week I did some modifications. One week after the excision, I was back to a fairly normal Ashtanga practice, though with knees down during chaturanga. I also was back to practicing jump backs and jump throughs, so I was glad to only have a week off from that.

My goal asana for this summer, bhujapidasana, is going to have to wait a while longer! My arm is not going to like my leg resting on it! 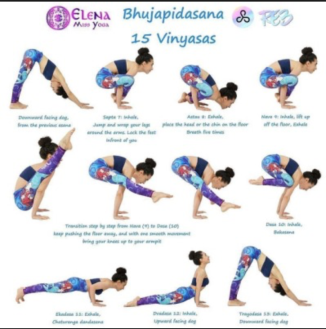 And starting next week I’ll be doing a Mysore practice once a week at OneYoga in Minneapolis, so I anticipate being a little weaker for that than I had hoped.

At times we need to take a step back and rest. Our bodies are good at telling us when to do that. Are we so good at listening, though?